From the town of Soria, I moved off on Tuesday around mid morning with a plan to head for the coastal resort town of Sitges, in Catalunya, about 60km south of Barcelona.

On the approach towards the coast, the road began to wind uphill, and had some crazy hairpin bends; it was 2nd gear stuff at times in order to climb the steep inclines. Once at the highest point of the road, an amazing panoramic view of the city of Barcelona lay ahead; mountains all around, and the coast in the distance. I really wanted to get a photograph of the view, but there weren't any lay-bys big enough to safely pull over into, so the photo didn't happen. The road descended rather rapidly in much the same manner as the climb up, and then levelled out to the flat.

I travelled down a very tight, twisty road past a beautiful lake up in the hills once more, and finally came in to the outskirts of Sitges. There were 2 campsites right next to one another, but I wanted to see if there was anything closer to town. BAD MOVE! I almost got stuck in a street that would have been nearly impossible to back out of. It was 'one way', with cars parked all down one side, roadworks on the other side that I needed to swing out past, and then negotiate the space between a lamp post and a parked car, but I needed to get up on the pavement slightly and the post was close to the edge. I really started to panic a bit, but somehow managed to squeeze Hermione through - just!

I abandoned all further attempts at campsite hunting and headed back to the closest site, 'Camping Sitges', and booked in. They only had one pitch that was just about big enough, and had been making noises about having to charge for two pitches if the size was going to be over. Anyway, the van just made it on for length between the pitch markers. It was a nice site. Good clean facilities and excellent security. There was someone manning the gate 24/7 and no-one got in without being asked their business there.

Once pitched up, and satellite dish set up on Astra 2 for the first time this side of the Pyrennees (woohoo!-sadly the signal was still too weak for the BBC and ITV channels) I walked in towards the town. It was a fair old trek, over the railway bridge on down to the promenade and then having to walk it's length all the way along to the old church that stands on a cliff on the shore.

Sitges is an upmarket Spanish resort and most of the hotels were 3 and 4 star. Lots of waterfront restaurants lined the side of the street opposite the promenade, and the usual one or two chiringuito bars on the prom itself. The beaches were clean and looked after and there always seemed to be some council workers cleaning up. It had a nice relaxed feel about it this early in the year, although I heard that it gets very busy in the summer. It proved to be an ideal base for the relaxing seaside aspect to it, and also for visiting Barcelona on the train which cost 5e return. 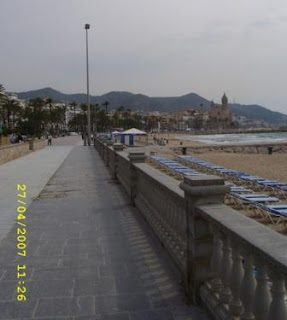 I went to Barcelona on two separate days and spent the afternoon each day walking around the main streets. I found it quite difficult to get my bearings though, and it didn't leave as good an impression on me as Madriid did, but then, maybe that's because I didn't have a personal guide this time! That said, I still enjoyed both visits and walking around the parks and shopping streets. It's definately a shopping city.... there are any number of shops and small market areas, so I bought some shorts and flip-flops when I was there. 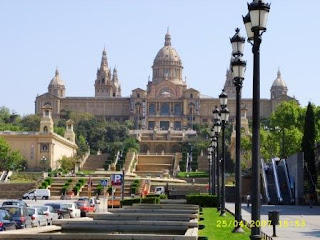 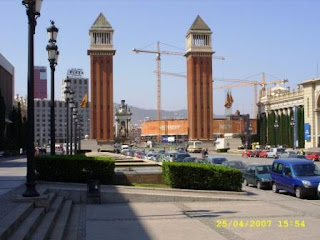 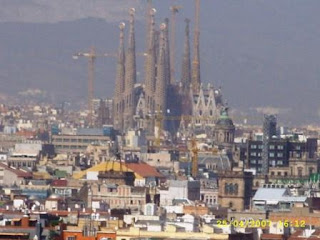 I actually preferred being in Sitges though, and was taken to chilling out in some of the bars and restaurants which were quite reasonable for an upmarket town.

There area great beaches too, if that's your thing, and everyone seems to own a small, fluffy, yappy dog. Poodles, Yorkshire Terriers and Bischon Frise' everywhere. I think it's like an accessory to the rich - like a handbag.

Yes, Sitges was really nice for a few days. I had to finally wave goodbye on Saturday morning though, as France and Italy are calling.

Camping 75e 4days
50e diesel in Barcelona on the way out towards France.
bearkit at 03:21